Vital for our continued existence is a process called photosynthesis whereby plants absorb carbon dioxide and water from the atmosphere and soil and, using the sun’s energy, decompose these compounds into carbon, hydrogen, and oxygen. Hydrogen and oxygen are then used for the tree to grow, and surplus oxygen is release back into the atmosphere for us to breath.

So how does the burning of wooden logs, which were once live plants that were a part of this process, affect the delicate ecological balance in nature? It doesn’t. When wood is burned in the correct manner, no more carbon dioxide is released from this process than what the tree it came from accepted from the atmosphere during its growth. If the logs were left to rot, they would emit the same amount of carbon dioxide as what they release when being burned. For this reason burning of logs, in contrast to fossil fuels, has no relation to greenhouse effect. 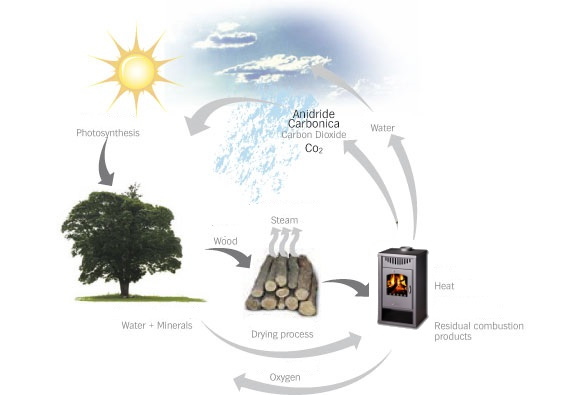 The oil, natural gas and stone coal are fossil coals and when these are burned the carbon that has been accumulated in the bowels of the earth enters the atmosphere and this increased concentration of carbon dioxide is directly connected with the global warming and climate change that has been observed over the last years. Using logs rather than anthracite and coal means less burning fossil fuels, less concentration of CO² in the atmosphere and a cleaner environment.